One week on the road. I can’t believe how quick it’s gone already, yet it feels like we’ve been doing this for years.

We left on our trip of a lifetime last Wednesday, 23rd May. Funnily enough, it was five years to the day that Adam and I decided we’d officially become an item, and we didn’t even realise until later that night when we had set up camp and I happened to look at the calendar. I don’t think either of us could have imagined we’d be here right now if you’d asked us five years ago. Seems it really is a special day for us.

We had planned to just do a free camp near Newcastle for our first night as we passed through, but the day before we left, decided to book into the Stockton Beach Holiday Park for three nights, taking advantage of their 30% off deal for three or more nights. Honestly, we could easily have stayed here for two weeks. Not only did we have prime position in the holiday park (straight across from the kid’s park and amenities) we just really loved exploring the area.

Our first stop and already our first place on our list of ‘places we need to come back to.’

We caught the ferry from Stockton to Newcastle and had a walk around, exploring the town, the beaches, the ocean baths and the foreshore. We walked out along the break wall and saw the wreck of the Adolphe which had a ‘big crash’ (according to Kawhi) in 1904. 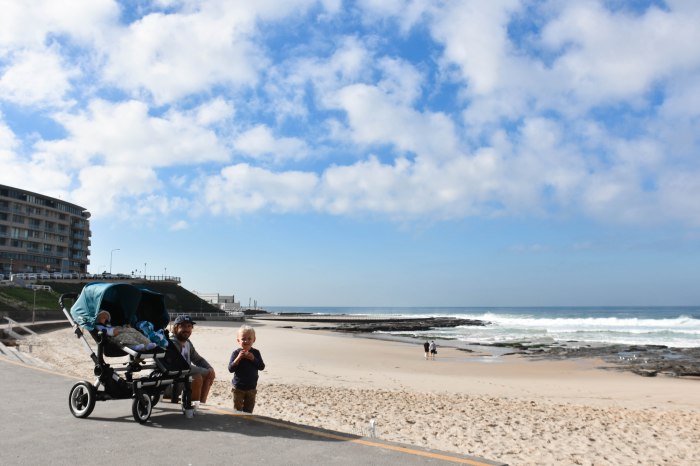 We drove to Shoal Bay and became super proud parents when Kawhi, at only two years old, walked all the way to the top of Tomaree Mountain, 161m high, all on his own. The poor little guy was absolutely buggered after that and had to hitch a ride down with Dad, followed by a two and a half hour sleep in the car. 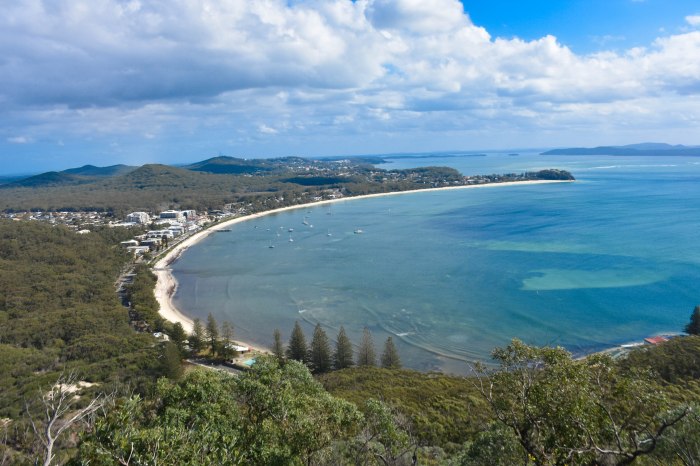 Once we left Newcastle, we free camped for a night in Macksville by the river. On the way there, we detoured off the highway to Wauchope and visited Timbertown. Kawhi absolutely loved riding on the steam train, and as there was hardly anyone there, we got to take him for a second ride.

We seemed to be having a few teething issues with our water tanks and water pump while we free camped, so we booked into a caravan park in Ballina for two nights on our way to the Gold Coast so we could sort them out. After all, it’s kind of hard to free camp if your water supply isn’t working 100%!

No trip to the north coast is complete without a visit to Byron Bay, particularly the Lighthouse (and most easterly point of the Australian mainland) and The Farm. Two of our favourite spots up here.

But I think my highlight of the week happened today. We called into Brunswick Heads on our way to the Gold Coast and the water was just so inviting that we couldn’t resist a swim. We were playing around with Kawhi in the water and realised we were surrounded by about a dozen little friendly fish. Kawhi thought it was awesome. This, although a tiny moment in time, was exactly the kind of experiences I was hoping we’d have on this trip, and to see Kawhi loving it so much made me realise that we sure have made the right decision to pack up all our stuff, take off and chase those special moments. 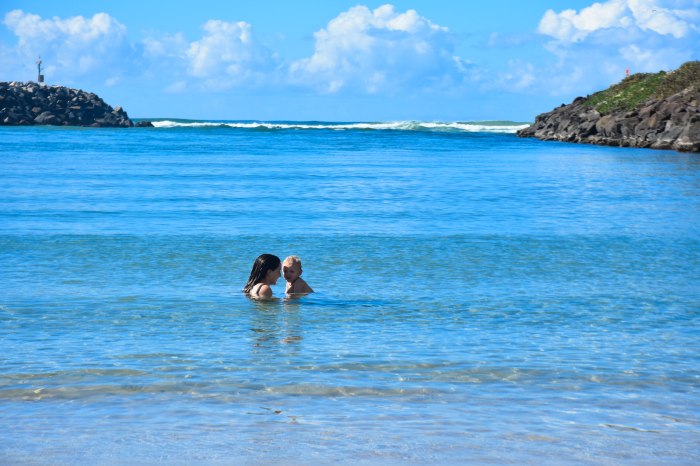 So how did our budget go in the first week? Ha, budget. What a joke. Let’s put it this way, our weekly budget was well and truly spent in the first couple of days. Even if we excluded the one-off expenses such as upgrading our NRMA Roadside Assist to top cover, an E-Tag, a BIG4 membership and a few last minute repairs/parts, we went so far over our weekly budget that I stopped recording our expenses. Oh, and we have also chewed through all our internet data! We’ll put it down to ‘we’re just learning about this new lifestyle’ and leave it at that. We’ll try harder next week.

How are the kids adjusting? Kawhi is going really great. Like, way better than we expected in the first week. He keeps saying that we’re on a ‘big holiday’ and he loves getting out and about and seeing new places. Better than that, he’s loving having his Dad around all the time. Luna is still pretty cruisey during the day, but my gosh, she is shocking during the night. Waking up every 20-30 minutes some nights, it makes for a tired Mama the next day. But hey, I’d rather be tired here, then sitting at home in our house wrangling two kids on my own for the day. Hopefully, she’ll crack a few teeth soon and things will get better.

The Triton has done us proud so far. A lot of people give Triton’s a bad wrap, but honestly, we can’t in anyway fault this car the whole time we’ve owned it. Touch would this continues. It’s towing great and fuel consumption is great, sitting at about 14-15L per 100km.

We’re still finding tiny bits and pieces that we need or would like for the caravan, or different setups we’ll have on our next one. Yep, we’re already talking of our next caravan, not in the near future, but we just can’t see ourselves settling back down into a house for a while. But minus the water issues we had during the week, which we think we’ve got sorted, the caravan has also gone really well so far!

In our first seven days, we’ve done 1,300kms, set up in four different locations, free camped, stayed in caravan parks, spent way too much money, lost Kawhi’s (only) shoes, survived listening to the Fireman Sam theme song 5,487 times in the car (or thereabout.) We’ve had sun, we’ve had rain, we’ve met other families travelling Australia, we’ve climbed mountains, we’ve worn the same clothes a few days in a row and haven’t showered, we’ve swam, we’ve walked, we’ve seen flying dolphins, we’ve gone back to The Farm and found Kawhi’s lost shoes, we’ve crossed our first border and ticked off the most easterly point of the mainland.

View all posts by taggtribe